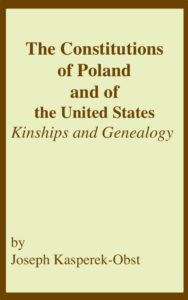 As the eight-century-old Polish Republic was entering into its hundred-twenty-three-year eclipse as a political entity, on the other side of the ocean there was springing to independent life a young people, the bulk of them settled there for no more than a few generations. A joint consideration of these two historical events, an attempt to associate in any fashion countries spatially so distant from one another — particularly while having before one’s eyes our contemporary economic-political map of the world — is likely to induce a sense of ludicrous mis-juxtaposition. Accordingly it is helpful to bear in mind that the relative situations of these two countries in the world today are not those of the period when the Polish Republic slid into eclipse and the United States rose to the dignity of nationhood.

In area the two countries were at the time nearly equal. The population of Poland came to twelve and a half million, “not counting the population increment between the first two [partitions] and [the third and final partition in] the year 1795;”1 the population of the United States amounted to not quite four million.2Poland at that time had behind her eight hundred years of recorded history — a colorful history woven out of labor and struggle, achievement and reversal, victory and disaster — a history of social evolution over a span of over thirty generations. Still more noteworthy, the Polish Republic comprised a voluntary union of Poland and Lithuania (the latter including what was then called Ruthenia and is now the Ukraine and Byelorussia) which over the centuries were gradually becoming transformed by a process of cultural integration into one people, and if only on that account constituted a phenomenon such as the United States were in their own turn to become.

An awareness of these truths facilitates an examination of partial parallels, and a still more probing study leads to the conclusion that kinships and mutual influences have long existed between the two peoples. Offhand one can spot evidence of these influences in the participation of Poles in the American Revolution of 1776-83 and in the American Civil War of 1861-65. Names of those who gave their services in the struggle for theindependence and preservation of the United States include those of generals such as Kościuszko, Pułaski, Krzyżanowski, Karge and Shoepf. The search for still earlier affinities will conjure up the image of Dr. Curtius, who as early as the colonial period established the first college in North America.3In passing one must mention the first arrivals from Poland: craftsmen who are recorded in the early annals of America not only for having founded the production of glass and wood tar, but also for having organized the first strike in America: a strike which, employed successfully in the struggle over equality of rights, earned them recognition as the first heroes in American history.4

History also recalls the American physician Dr. Paul Fitzsimmons Eve, who participated in the Polish Uprising of 1830-31 (and whose home at 619 Green Street in Augusta, Georgia, is today a historical monument);5as well as the American novelist James Fenimore Cooper’s organizing, during that Uprising, of an American-Polish committee of assistance for the Poles who were fighting for their independence.6Nor can we pass over the fact that the “Blue Division” — so called by the Poles after the color of the soldiers’ uniforms and formed of Polish-Americans with the official approval of the United States government — fought during 1919-20 to secure the rights of the Polish nation to the historical soil of the Republic; or that American pilots headed by General Merian C. Cooper — a relative of James Fenimore Cooper’s and at that time a young lieutenant colonel in the Polish Air Force — blasted out renascent Poland’s eastern borders even as, toward the end of World War I, she made her return debut to the map.7

But in fact the roots of mutual Polish-American influence go back deeper still.