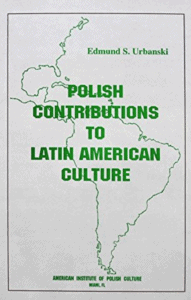 United States Literature is enriched with a new and interesting book
on the multi-ethnic and multi-cultural blending of civilizations, so typical in the Western Hemisphere. In this case it refers to Latin America, where Creoles, Mestizos, Amerindians and Negroes live side by side with European settlers some of whom are from Poland.
The title of this book, Polish Contributions to Latin American Culture, describes the strong participation of these Slavic settlers in the civilizational development of Spanish – and guese- speaking America.
This participation is equally visible in sciences, education, fine arts and technology.
Among those praiseworthy deeds, such little known facts that Poles were presidents of universities in Chile, Peru and Honduras, and co-founders of medical schools in Brazil and Uruguay deserve attention. A Polish engineer established the first Polytechnic University in South America, another
built the trans-Andean railroad in Peru – the highest in the world – and a Polish physician introduced apparatus for blood transfusion in Mexico in the 1870s.
No less important were the activities of two Polish entomologists, who combined their university duties in South America with those leading to the improvement of agriculture. One spent 40 years in Brazil, not only becoming a recognized authority in butterflies but also, with the introduction of soya, considerably enriching Brazilian agriculture. The other, engaged in zoological research, was able to introduce and improve cultivation of long-fiber cotton in the tropical region in Venezuela, where it had never been grown.
Significant also were 12 exploratory expeditions of a Polish naturalist to Amazonia, described in a voluminous book today considered a basic work by Amazonian experts.
Polish engineers were engaged in the construction of highways and suspension bridges in 19th century Colombia, Peru and Venezuela – countries neglected during the Spanish colonial period. Also important was the construction of river
and sea harbors in Argentina, Brazil and Peru, facilitating their commercial communication with the outside world.
Polish engineers, engaged previously in their homeland in the construction or design of airplanes, helped to develop the aeronautical industry in Argentina and Brazil. A Polish industrialist established a truck factory during WW II in Brazil, which made it independent from foreign imports.
Of significant value was the participation of Polish scholars in the development of nuclear sciences at the Argentine, Brazilian and Mexican universities; some of them were even appointed to high offices.
Even without mentioning other fields, this overview shows the variety of capacities of Poles, displayed in their adopted countries or wherever they are invited for collaboration.
The book reviewed here was edited by a noted Polish American scholar, Dr. Edmund Stephen Urbanski, a professional Latinamericanist with over 50 years of experience in Hispanic American affairs. He established a topical discussion section in the New York-based Polish Institute of Arts and Sciences (PIASA), where he was joined by other Latinamericanists, who for many years presented results of their own research and experience.
All this was jointly utilized in this handsome volume, published by the American Institute of Polish Culture.
We are sure that this 300-page work will attract not only scholars and libraries, but also anyone who is seriously interested in hemispheric affairs and their European connection. It is a kind of almanac which also complements our knowledge of the exciting and exotic countries situated between the Mexican Rio Bravo and the Argentine Chilean Tierra del Fuego.