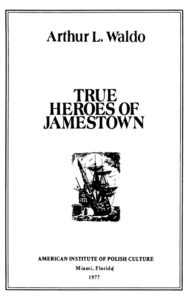 True Heroes of Jamestown by Arthur L. Waldo is a brilliant and controversial record of historical incidents that led to the creation of the U.S.A. What were the true relations for the British coming to America, and why did their two previous expeditions fail? A Waldo’s research reveals significant information undiscovered by other historians while discovering the real roots of the United States.

“True Heroes of Jamestown is a great book, a gift to the Great Anniversary of the United States!” “American history should be rewritten,” is the general opinion of those who have acquainted themselves with this delightful book. Students of our early history will find this book a valuable source of reference.

Arthur Leonard Waldo
An Amercian writer, educated here and in Europe, soldier (army Major, served in France) scholar, lecturer, civic leader, editor, department head with Coordinator of Information (Office of Strategic Services); author of books, numerous brochures and great number of essays. Since 1970 he is the President and Executive Director of the U.S. Population Ethnohistorical Research Center of America.