John Paul II, I was Looking for You 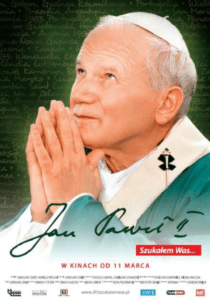 The documentary film John Paul II, I was Looking for You, is about the life and legacy of Pope John Paul II. Ithighlights the Pope’s unique place in the history of thechurch and the world with his incredible charismatic personality, openness and a sense of humor that have united people of various faiths on all continents.

Included are archival materials from the pilgrimages of Blessed John Paul II to thirteen countries, and exclusive interviews with spiritual leaders such as Cardinal Dziwisz, the Dalai Lama, and Rabi Yisrael Meir Lau were used in the production of this fascinating documentary. The DVD is presented in four languages: Polish, English, Italian and Spanish.